“It is the mind that gives our world color & sound with its store of images. That supremely real & rational certainty which one can experience is, in its most simple form, an exceedingly complicated structure of mental images. Thus there is, in a certain sense, nothing that is directly experienced except for the mind itself. Everything is mediated through the mind; translated, filtered, allegorized, twisted, & even falsified by it. We are enveloped in a cloud of changing & endlessly shifting images.” ~Carl Jung

Treading the waters of one’s own mind is a daunting feat. The complexity of human consciousness is a vast & bottomless ocean yielding currents that allow each of us to experience external reality through the filter of sensory perception. The magnitude of these experiences provide a basis for what we interpret as corporeal property; tangible matter existing apart from mind. We assume this corporeality on the basis of faith, as we’ve no means to experience it directly without the sieve of sensation. Likewise, we presume that other fellow human beings exist autonomously, undergoing their own independent experiences of mind & matter. We cede this postulate as a matter of practicality, being that we’ve no way to experience reality through someone else’s psyche – but what if we could? This is the concept Lithuanian writer/director Kristina Buožytė undergoes in her literal head-trip of a film, Vanishing Waves.

The synopsis: A neuron-transfer scientist experiments with the thoughts of a comatose young woman.

Meet Lukas (played by Marius Jampolskis), a neural scientist who is testing an experimental process intended to monitor the psychological state of a comatose patient, Aurora (a namesake taken from the film’s original Lithuanian title, played by Jurga Jutaite) who has become unresponsive following a near-drowning accident. The intent of the experiment is to impartially observe Aurora’s unconscious mind, but like all good stories go, events don’t play out quite as planned. What was designed to be an observational process quickly becomes a surreal interaction of sorts, luring Lukas deep into the dark subconscious of Aurora’s fractured personality.

While segments of the film occasionally surface to anchor the reality of Lukas’ personal life at home with his girlfriend & professional life in the laboratory with his scientist cohorts, the bulk of the film is spent within the dreamlike realm of Aurora’s mind. It is in this purview where we’re inundated with vivid imageries & vacillating metaphors, both of which grow darker & more complex as our protagonists become more entangled. These visceral frameworks include empyreal shorelines & ominous oceans, spacious open rooms & claustrophobic corridors, lavish hors d’oeuvre & lustful carnalities, warm rays of light & foreboding black holes – all woven together in a stream-of-consciousness flow equal parts compelling & confounding.

With visual cues taken from the likes of Kubrick, Tarkovsky, Dalí, & Escher immured amid the confines of a Lynchian meets Cronenbergesque tone, Buožytė’s presentation builds on the aesthetic archetypes of these influences while forging a mode of expression entirely her own, gracefully balancing the line between homage & ingenuity. Thematically, the film delves into concepts of trauma, repression, sexual identity, & the extensive chasm between Id & Ego. Even despite its heavily hypnagogic rhythm, Vanishing Waves is stealthily sufficient in washing up wide-ranging emotional spates, largely due to the fact that unabridged empathy is often the only lucid stave to grab hold of in an atmosphere predominately abstract.

Jung was eloquently accurate when he described our conscious existence as being enveloped in a cloud of changing & endlessly shifting images. The same could be said for Vanishing Waves, a juggernaut of surreal cinema that emulates the crest, trough, & abstruse intermediate of the mind – it challenges us to dive inward for comprehension of the external, a journey terrifyingly beautiful, & one that examines what it means to be human.

Back in 2006, I came across the soundtrack for an obscure documentary film titled The Trials of Darryl Hunt. I initially sought out the soundtrack to hear a live recording of the Red House Painters song Have You Forgotten from one of my favorite songwriters, Mark Kozelek. While browsing through the compilation’s many artists among the likes of composer Paul Brill, Andrew Bird, & Califone to mention a few, I noticed one band name that comically stood out from the rest; Margot & the Nuclear So and So’s.

Upon listening to track 14, a demo titled Things You Shouldn’t Do, I was intrigued by the song’s dynamic simplicity, pitting soft acoustic instrumentation up against brashly plain-spoken lyrical content:

At the time, I was readying for a weekend trip to Charleston & decided to purchase the band’s recently released debut LP to aid my travels. From my experience, the allure of open highway driving & new music often complement each other well, & The Dust of Retreat certainly proved to be no exception. Margot’s sound was expansive, yet direct – as if a few art school dropouts had infiltrated a chamber orchestra performance & then collectively decided to score a Wes Anderson film. That first Margot record meant a lot to me at the time, & connected with me on many levels in the way it was able to convey a genuinely cynical angst amid the backdrop of an orchestral indie rock scaffolding – all bordering on a tone somewhere between punk & precious.

Following the independent success of their first album, Margot was then signed to Epic Records for the culmination of their follow-up, which would ultimately result in the release of two separate full lengths; one titled Animal! & the other, Not Animal! This dual release was implemented due to discrepancies between band & label regarding which songs were to be included on the record, with Epic preferring Not Animal’s track listing, & Margot preferring Animal’s. Yet despite all the contentious publicity, both records proved to be adeptly cultivated, fine tuning the elements of edge & enchantment that had made their debut so memorable. & as situational happenstance would have it, I was yet again in the midst of travel during the time Animal/Not Animal’s was released in 2008, which further favored my sentiment towards the work as a whole & my affinity towards this burgeoning brand of indie rock.

Margot went on to independently produce two records over the next four years (Buzzard & Rot Gut, Domestic), both favoring a more traditional lineup, foregoing the big band aesthetic while coarsening their jagged edges. These albums featured a louder, grungier side of side of the band – both musically & lyrically. & while I found the brusque presentation of this output commendable for its attitude, I ultimately felt like there was an intimate underpinning absent from the atmosphere of these records. I remember thinking, if only they could find a way to incorporate this trademark rough-hewn eccentricity with the intimacy of their first two records:

For the band’s fifth studio album, they decided to self-produce the record, tracking it entirely at their home studio via analog two inch tape. Not only was the album self-produced, but it was also self-released on their label, Mariel Recording Company. Given the nature of analog tracking, much of the album’s 13 songs were recorded live, in addition to heavier use of acoustic guitars & layered vocals – all of which work together to express a distinctly comfortable vibe. Thematically, Slingshot to Heaven rides a conceptual through-line of nostalgia coupled with the acceptance of settling into adulthood – or as frontman Richard Edwards puts it, we wanted to “make a record that came across like a sci-fi dream about my decade of touring & making records obsessively while slowly becoming an adult, or at least something vaguely resembling one.”

Slingshot to Heaven excels in its ability to establish a lush melodic bedding to anchor its lofty, often humorously awkward lyrical musings like, “you’re the apple of my eye, let’s be a pair”, “I miss you when you’re gone, but I get so much done, I get whole TV series watched”, “so long Chicago junkie, I don’t have the brains to fry”, & “go to sleep you little creep, your father loves you but he needs peace”. Its verbal pallet is one peppered with references to various geographical locations, flying saucers, drunken parties, lovers, children, & hazy recollections all combined to weave a tapestry that’s both pleasant & off kilter simultaneously. & if that wasn’t enough, the band also shot a 45 minute documentary titled Tell Me More About Evil on 16mm film stock to accompany the record, featuring stripped down performances of the album tracks.

Of Margot’s now five full length studio albums, I find Slingshot to Heaven to be one of their most accomplished – not necessarily because it’s a “better” album than the rest, but because of its ability to take cues from its four predecessors, all while maintaining a level of immediacy & intimacy that’s comfortably refreshing. I’ve yet to hit the open highway with Slingshot in tow, though I’m quite content with where this record takes me; a weird & lovely destination all its own.

Some folks are way wrong.

This record courtesy of Michael Shepard’s Nashville-based band Boys on the Radio is the epitome of what pop music can achieve when it’s crafted by authentic musicians, as opposed to corporate cogs who merely corral demographics.

If you’re ever in the mood for some infectiously slick pop music that rocks, check out Horizons & support genuine DIY musicians! 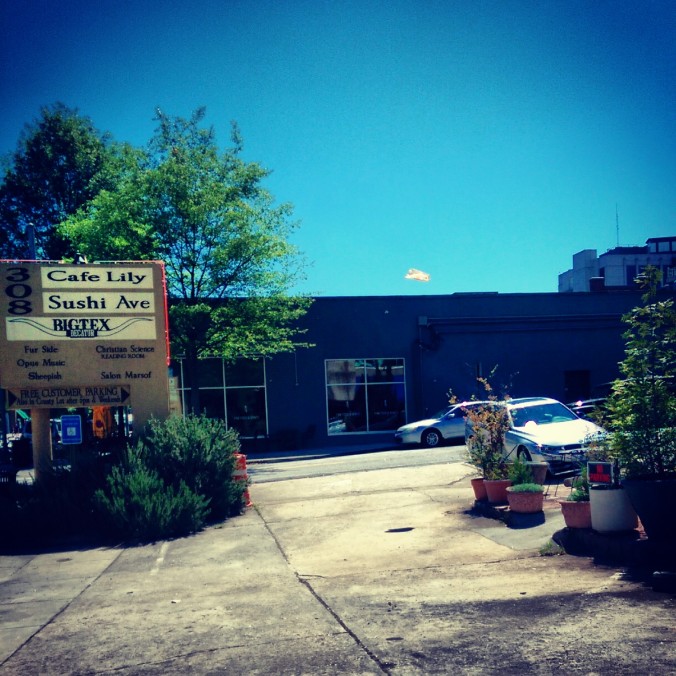 “& that’s the day I realized that there was this entire life behind things, & this incredibly benevolent force that wanted me to know that there was no reason to be afraid, ever…” 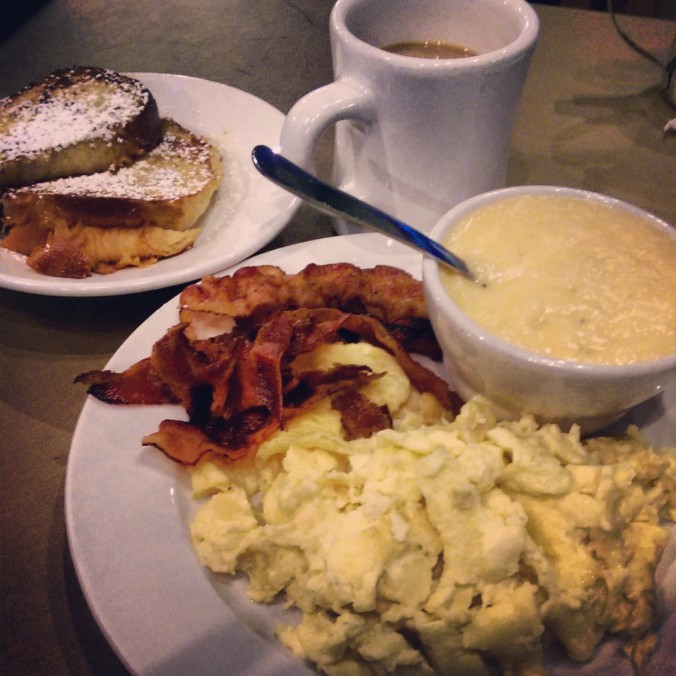 At some point, the all-nighter melts into the morning.  No time for sleep, but a hearty breakfast helps – especially one at Sweet Melissa’s in Downtown Decatur!

Star Bar will never be the same again, & Europe has no idea what’s about to hit them…